It is just over a year since we published an article on X1’s apprentices. During that time Raveena has continued to develop her bookkeeping skills, under the guidance of Janet Locke (X1’s Administrator) and 3aaa Academy. On 3 May Raveena was awarded her Level 2 AAT (Association of Accounting Technicians) Diploma at a graduation ceremony at the Watford Academy. Tim Lance and Janet were in attendance. Raveena has continued to grow in knowledge and experience. One example of this is her implementation of electronic and cloud-based cash books at X1. In September 2017 Simran joined the X1 team as Marketing Assistant Apprentice on a Level 3 Digital Marketer apprenticeship. She has proved to be a quick learner, supervising the progress of direct marketing campaigns and working on data tracking and analytics. Simran has also worked hard on raising X1’s profile on social media, including facebook.com/x1ltd Recently she managed an X1 marketing project from inception to final production, ensuring all the schedules were kept to and that the follow-up campaign met the criteria of X1’s strategy. The follow-ups included her making telephone calls to the prospects and analysing the responses. When Simran and Raveena each achieve Level 3, they will progress to Level 4 while continuing their apprenticeships at X1. Apprenticeships have made a positive difference at X1 and we look forward to this continuing over the coming years. 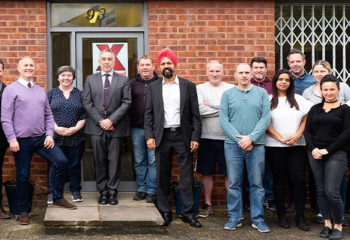 21st August 2019 / 3729 / 0
On 27 April, X1 and Steve Lee from the British Print Industry Federation had the pleasure of spending a couple of hours with Tan Dhesi,... Continue reading